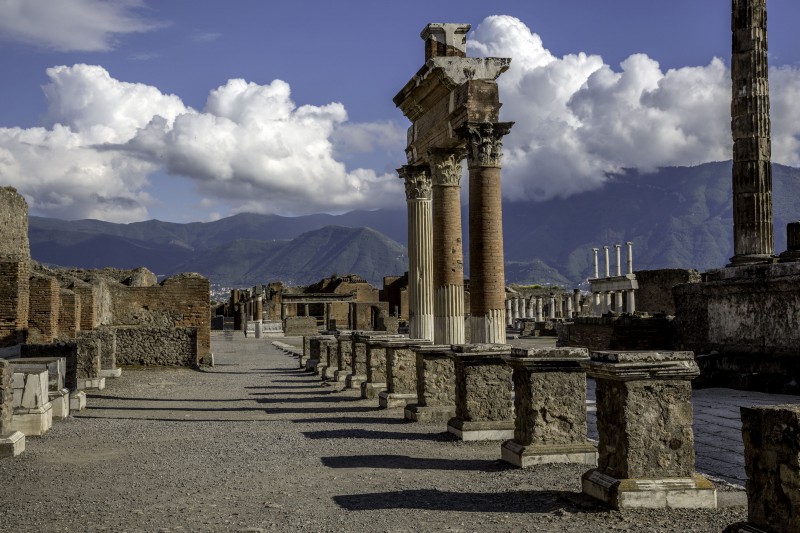 Do you know why choosing Sorrento for a leisure or bonus trip is an excellent idea? Because it is located a short distance away from two of the world’s most important archaeological sites – Pompeii and Herculaneum. Easy to reach and awaiting discovery (and both UNESCO World Heritage Sites), they are two cities of age-old fascination, bound together by their shared, tragic fate: the eruption of Vesuvius in 79 AD, which left them completely buried by the volcano’s lava and ash. Thanks to the archaeological digs that brought to light finds of inestimable value, these two “eternal” cities can be experienced once again, while strolling amid perfectly preserved buildings, villas, and monuments. If you’re planning a stay in Sorrento, take the opportunity to get to know Pompeii and Herculaneum by joining an excursion, even if only for one day, in pursuit of art and culture.

The archaeological excavations of Pompeii: 5 places not to be missed

Visiting the archaeological excavations of Pompeii is one of the most beautiful experiences in the world, because it allows us to immerse ourselves in the fascination of a remote past and to enjoy the unique thrill of travelling back in time. The archaeological area is quite vast; if you don’t have a lot of time to visit all of it, here are the 5 places that absolutely must be seen in order to grasp the essence of this extraordinary city.

House of the Faun: the symbol of Pompeii, a large, luxurious dwelling that belonged to a wealthy Roman magistrate, rich with precious treasures.

Villa of the Mysteries: famed above all for the splendid frescoes discovered in one of the rooms of this elegant Roman home with a spectacular view of the Gulf of Naples.

The Forum: to immerse yourself in the true heart of the city, home to shops, public buildings, and temples for religious worship.

Garden of the Fugitives: immortalizing the exact moment when time stopped forever for the city of Pompeii, with the casts of some residents whom Vesuvius’s lava took by surprise during their desperate escape.

The ancient city of Herculaneum was discovered nearly by accident in 1709 while a well was being dug. Although its archaeological area is smaller than Pompeii’s, its remains are perfectly conserved, and perhaps even more fascinating. While walking down the streets and avenues of this unbelievable city within the city, many points of interest may be admired. The following are the most important villas and locations.

Villa of the Papyri: the symbol of Herculaneum, this villa accessed from the sea was home to a library with more than 1,800 papyri, precious mosaics, and splendid statues.

House of the Deer and House of the Alcove: two luxurious Roman residences with a terrace overlooking the sea, where frescoes and a unique mosaic floor were discovered.

Places where the Ancient Romans gathered: the Forum’s Baths, an ancient inn, the Palaestra and the Theatre, allowing the habits of the Herculaneum’s residents to be discovered.

Would you like to enrich your holiday or bonus trip to Sorrento with an excursion to Pompeii and Herculaneum? Contact Russo Agency!

For any information please fill in this form.

Pursuant to art. 13 of Legislative Decree no. 196/2003 we inform you that your data are stored in the digital database of the controller: Russo Travel Srl., Via Sant'Antonio 13, 80067 Sorrento (NA). Your data, which is optional (but the non-conferment could make impossible to fulfill the request), are treated in relation to the services of this website, they take place at Russo Travel Srl., Via Sant'Antonio 13, 80067 Sorrento (NA), and are only handled by technical staff or others charged with occasional maintenance operations. No data deriving from the web service is communicated or spread.